Two first half goals from Tyler Brock gave the Reds all three points despite a late goal from Ammanford.

After leading at the break, the Red’s had to dig deep in added time as Jordan Langley pulled a goal back in the last minute.  Ammanford pushed to get a second but were unable to find a second.

The win moves Briton Ferry into 3rd place (dependent on other results over the weekend) and keeps the top of the JD Cymru South tight.  The Reds remain unbeaten so far this season with six wins and five draws.

Connor Goldsworthy sent a cross into the box early on which saw Tom Walters attempt an overhead kick but couldn’t connect with the ball.

Luke Bowen soon had a chance to open the scoring after being set away though the middle.  Bearing down on goal Ammanford keeper Joe Massaro came out and saved from Bowen on the edge of the box.

Ammanford after surviving the early Ferry chances then went on to a good spell of pressure.  Lee Trundle shot wide, and Liam Samuel saw his effort blocked by Kris Evans.

The visitors continued to pressure the Reds and Trundle picked the ball up outside the box.  Hitting a shot on the turn he almost got the first goal as his low shot went just wide of Rhys Wilson’s goal.

Trundle soon had another go at goal from the left, but Wilson was equal to it and saved.

It was the Reds who opened the scoring with a quick counterattack catching Ammanford out.  Connor Goldsworthy breaking down the left and putting the ball into the box to Tyler Brock.  Brock with a good finish into the bottom corner. 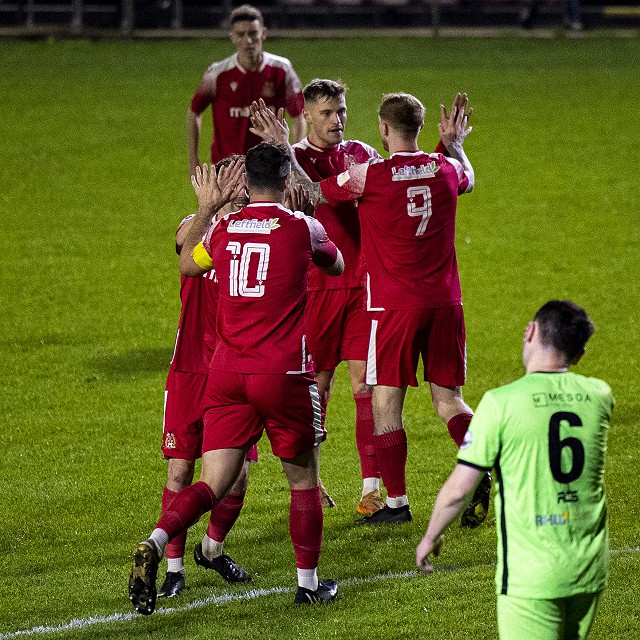 Rhys Wilson was needed to keep the host ahead with a fine stop to turn Jordan Langley’s header over the bar.

As half time approached Ferry doubled their lead.  Goldsworthy again breaking down the left and taking aim at goal.  His effort was blocked, and the loose ball found its way to Brock on the edge of the box.  Brock sent the ball into the top corner and despite fingertips from Massaro he got his second.

Ammanford tried to get back into the game and Danny Birch saw his effort saved by Wilson.

Lee Trundle missed by some distance from a free kick to cheers from the Briton Ferry supporters.

Despite the visitor’s efforts to get back into the game the Reds had chances to extend their lead.  Tyler Brock denied a hat trick as his shot was cleared off the line and McCauley Power’s long-range effort go wide. 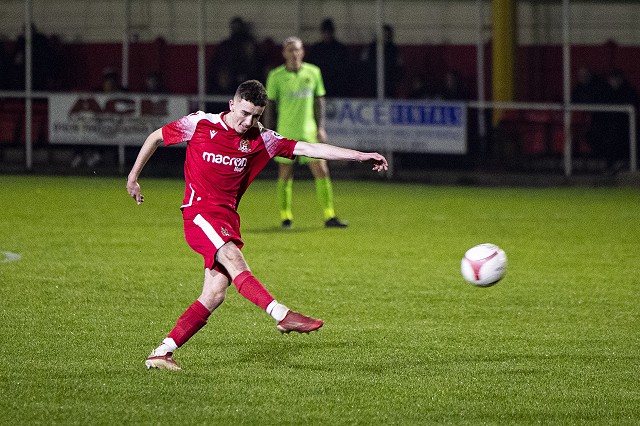 Rhys Wilson made another good stop as he saved Callum Thomas’ shot at the near post.

As time was coming to an end Jordan Langley broke into the box and fired past Wilson to set up a tight finish.

Ammanford pushed hard during added time they were unable to really trouble the Red’s goal.