Luke Bowen’s goal in added time sent Briton Ferry into the next round of the Welsh Blood League Cup South.  Taffs Well who were down to ten after half an hour took a 3-1 lead but finally succumbed to pressure.

Ethan Cann gave the Wellmen the within 30 seconds of kick off.  Luke Bowen levelled the scores after 25 minutes.  With 37 minutes played The Red’s found themselves behind again after David Lyon got Taff’s Well’s second.  Ethan Cann made it 3-1 on 42 minutes, but Tom Walters pulled a goal back on 43 minutes. 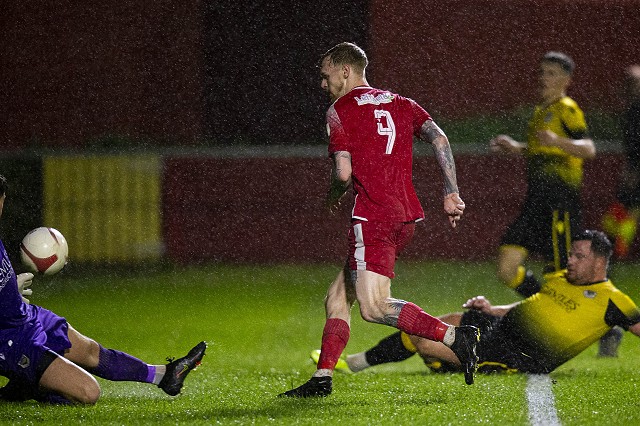 Ferry pushed Taff’s Well back and had most of the early play in the second half.  Their pressure told just after the hour when Mitchell Bates levelled the scores.  Then in added Luke Bowen gave the Reds the win. 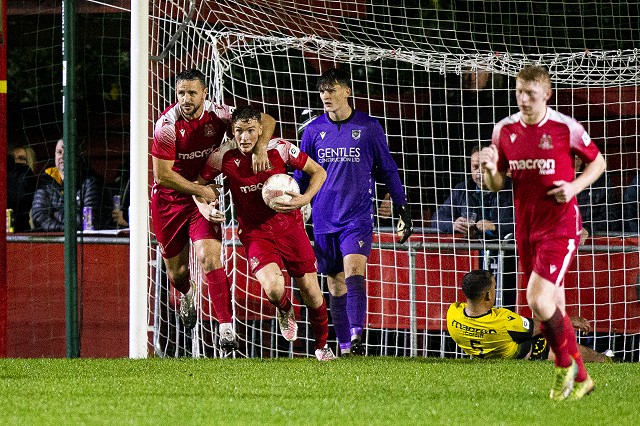 The Visitors made a fast start and had the lead within 30 seconds of kick off.  Cutting the Reds defence open David Lyons on the edge of the box played the key pass into Ethan Cann who hit a low shot past Tyler Evans.

Cann had a chance to make it two when Kris Evans clearance hit Josh Allen and sent the ball in on goal.  Tyler Evans was out quickly to narrow the angle and saved Cann’s low shot.

Tom Walters was able to find space on the right and get the ball into the box.  Luke Bowen read the ball and put it in at the near post to level the game.

A reckless challenge by Josh Allen on Mitchell Bates brought a flash point as players from both sides came together.  The ref was quick to act and gave Allen a straight red card.

The ten men soon had the lead David Lyon turning the ball into the net after Evans had saved Jan Maertins low shot.

Being down a player didn’t affect the visitors as a though ball found Ethan Cann who fired low into the bottom corner.

The Reds mounted an instant response getting the ball into the box and on the line, Tom Walters nodded it in.

Ferry pushed the Wellman back early in the second half trying to press their extra player.  Josh Jones forcing a save from King turning the ball out to the left.

A quick Ferry break sent Luke Bowen away down the left.  Pulling the ball back to Josh Jones who had the chance to shoot, but he pulled his effort wide of the post.

The visitor’s sat deeper and more compact trying to hit on the break.  Playing the ball behind the Ferry back-line with Ethan Cann trying to chase.

A good piece of play saw Kinsella set Declan Evans away on the left.  Evans put the ball right across the six-yard box where Mitchell Bates was to put away at close range.

A triple change for Ferry saw Jasper Payne, Nathan Jones and Kieran Williams all come on.  Williams was straight into the action sending a free kick into the box from halfway that almost found Kris Evans at the far post. 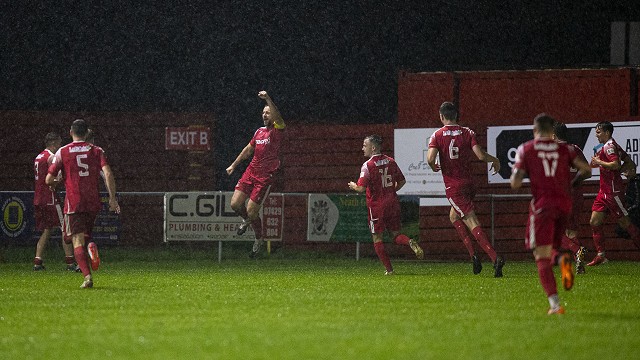 Luke Bowen’s solo run into the box won a corner.  Kris Evans rising to meet the corner and beating King only to see his effort cleared on the line.  As the host’s kept the attack going a cross in found the head of Jasper Payne who hit the post.

As the game looked to be going to penalties Ferry finally made the break though.  A high ball into the box was nodded down to Luke Bowen who fired in from close range.