The club had ensured preparation was done correctly by travelling up Friday evening and would like to thank sponsors Macron Store Neath, South Wales Transport as well as The Llangerch Inn(Llandrindod) and Beaufort Park Hotel(Mold) for all their help before and during the trip North.

On a beautiful sunny day for football, the teams paid respect to the fallen heroes of previous wars with an impeccable minutes silence pre-kick off. 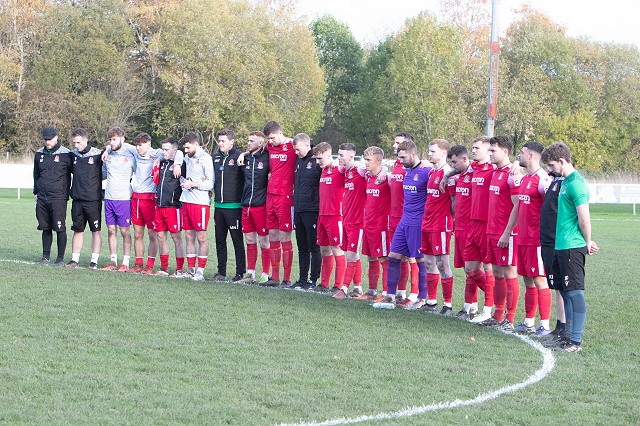 The management team kept faith with the same starting XI as the previous weeks win against Ammanford with academy midfielder Cory Woods continuing in midfield.

A scrappy first 10 minutes saw both teams try to get to grips with the occasion and a difficult surface and the first major incident was detrimental to the game with Mold defender Sion McHugh shown his marching orders by referee Thomas Owen for pulling back forward Luke Bowen when through on goal.

The Reds were then dealt a big blow on 25 minutes when midfielder Keiran Williams was forced to leave the field with injury, Dan Alfei was his replacement.

Shorlty after the hosts nearly took the lead when a shot fired goalwards after a Rhys Wilson punch needed Luis Bates to perform a goal saving header on the line to keep the score at 0-0.

With the Reds starting to settle into their passing game they were then rewarded on 39 minutes, a long diagonal pass from Callum Saunders was headed out and midfielder Cory Woods done superbly to win back possesion and slot a pass to the in form Tyler Brock who rifled his finish into the top left hand corner, much to the delight of the travelling fans that included his grandfather Noel who had made the long trip up North.

Shortly into the second half Nathan Jones replaced Cory Woods along with with a tactical change and this seemed to give the Reds a foothold with Mold who had worked tirelessly with the man less starting to feel the man difference.

The second and all important goal arrived on 62 minutes after some excellent link up play between Tom Walters and Luke Bowen saw the ball laid off to McCauley Power who then unleashed a shot from 25 yards that beat the dive of Mold's Elliott Quinllan, the goal Power's first senior first team goal for the Reds. 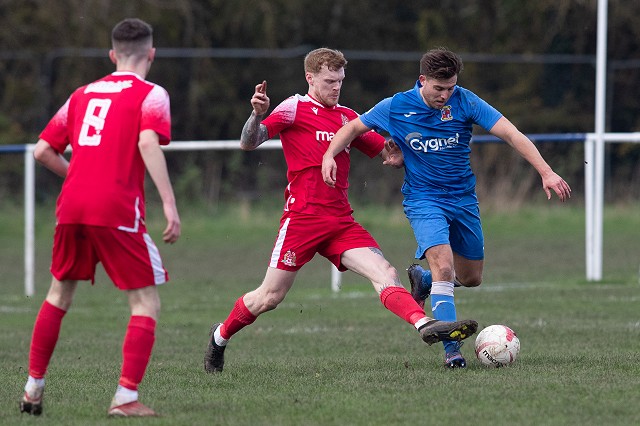 The hosts frustration saw the receive 3 quick yellow cards in succession and their afternoon got worse on 67 minutes when a high press forced a mistake that Power took control of, his through pass was dummied by Bowen to put Tyler Brock through one on one with Quinllan, and his calm finish made it 3-0, the goal Brock's ninth in all competitions this season.

Alex Gammond and Jasper Payne were both introduced in place of Brock and Evans as well as four substitutions for Mold, it took until 90 minutes though for the final goal to arrive, and it was a great bit of play that came from a Reds throw in their own half involving Connor Goldsworthy and Nathan Jones with their quick interplay allowing Callum Saunders to rake a divine 40 yard pass to Ferry number nine Tom Walters, his perfect control and left foot shot from 20 yards crept past the despairing dive of Quinllan to seal a superb club performance.

The club would like to go on record and thank all players, supporters and staff for travelling up the weekend and words from Mold secretary Chris Parry are probably the best way to sum the weekend up -

' I've seen some fantastic travelling support over the years in the Welsh Cup & FAW Trophy but full credit to the lads/ladies from Briton Ferry Llansawel AFC.

Exemplary set of supporters, players & staff. Created a fantastic atmosphere from start to finish. All the best for the season'.

Thanks to Chris and Mold for the great welcome and we can now look forward to the draw this evening for the next round.